Get Your Vancouver Canucks Winterboard Theme for the iPhone

Are you a rabid Vancouver Canucks fan? Do you have those flag thingies attached to both sides of your vehicle, proudly displaying your Canucks pride as your roll down the street to only get stuck in traffic?

As most of you in Vancouver (and the the rest of Canada) know by now, tonight at 6PM PST, our home team is going to start round 2 of the Stanley Cup Playoffs versus the Chicago Blackhawks.

It’s going to an amazing series as the Canucks are well-rested and healthy, but will be going up against a speedy, skilled and youthful Blackhawks team that dismantled the Flames.

Download the Vancouver Canucks Winterboard Theme for your iPhone

For those people with jailbroken iPhones, show your Canucks spirit by downloading the latest Vancouver Canucks Winterboard theme. Now, on top of having your face painted blue, green and white, plus the flags on your car, your iPhone can now be sporting the Canucks!

Here are a couple screenshots. Enjoy! 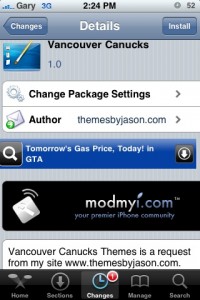 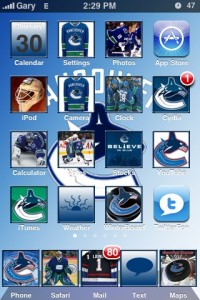 For all the people back East, are you guys and gals cheering the Canucks as “Canada’s Team” since they are the only Canadian team left? I would love to know what people are thinking in your neck of the woods. 😉

My prediction for this series: Canucks in 6 games. What’s yours?