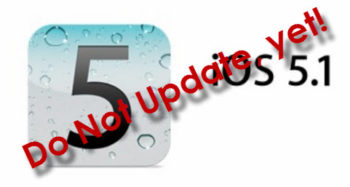 The iPhone Dev-Team has released an update regarding jailbreaking and saving your SHSH blobs, just prior to the new 3rd gen iPad announcement. With the release of iOS 5.1 over the air, Apple stop will stop signing 5.0.1 SHSH blobs.

Essentially what this boils down to for  iPhone 4S and iPad 2 users is no downgrading to 5.0.1 even if you’ve saved your SHSH blobs. iPad 2 users can still downgrade to 4.x if they have those blobs and any device before the iPad 2 can downgrade to any version of iOS.

In a nutshell: do not update to iOS 5.1 via iTunes!