Looks like the folks at Cupertino are at it again with their firmware updates. iPhone firmware version 2.0.2 was released a couple hours ago and can now be downloaded via iTunes or straight from Apple’s servers.

It’s funny how the firmware update is released just as I happened to jailbreak my iPhone 3G on the weekend. Anyways this release fixes some “minor bugs”, which essentially means that there are no new features but might make your iPhone run a bit more smoothly. Plug in your iPhone 3G into iTunes and update away!

As for the jailbroken crowd, expect the WinPwn/Pwnage Tool to be updated fairly soon! I am not going to update just yet because I will lose my jailbreak status. I am happy with the phone at the moment but I would like to update as well. There has been debates about whether or not jailbroken phones can one-click update. I’m sure you can and once WinPwn is updated I just might do that to test it out! 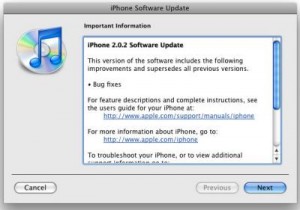 **Looking for an iPhone 3G case? Go get an invisibleSHIELD, the strongest protection for your iPhone backed by a 30 day moneyback guarantee, lifetime replacement warranty, and FREE shipping! Use coupon code iphoneinca for 15% off your purchase! Order today!**