Most of you have probably heard by now that this afternoon Apple released an iPhone firmware update in iTunes. The latest version 2.2.1 is supposed to fix the following: 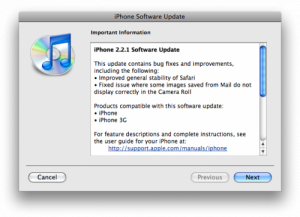 So it seems that this 2.2.1 update will fix some bugs and probably include a few other minor fixes not detailed by Apple. Also, it’s worth noting that this update will break the yellowsn0w unlock on the iPhone 3G! So do not update if you are using an unlocked iPhone 3G!

Here’s a mini FAQ I’ve created for those who need their hands held throughout this process! =)

Q: What Should Jailbroken iPhone 3G Owners Do?
A: DO NOT update to 2.2.1 if you want to keep your jailbreak. Wait for updated versions of PwnageTool and QuickPwn to be released by the Dev Team.

Q: What Should Jailbroken iPhone 2G Owners Do? Will I lose my unlock?
A: If you do not care for your jailbreak, you can safely update to 2.2.1 in iTunes because this firmware update does not touch the baseband. If you update, you’ll have to wait for the latest QuickPwn/PwnageTool to unlock/jailbreak.

*edit* for clarification: You have an iPhone 1st-generation phone….so no matter what you won’t lose the unlock. You’ll lose the jailbreak though if you update now, until we release the next version of the pwnage tools. You won’t have to worry about DFU mode as long as you remain jailbroken (if you ever lose the jailbreak, you’ll have to use DFU mode to get it again).

Here is a brief summary from Dev Team member MuscleNerd:

Until we release newer versions of QuickPwn and PwnageTool, anyone who’s currently jailbroken should avoid the update else you’ll temporarily lose the jailbreak.

*edit* Here’s a recent video he uploaded to QIK:

And of course it’s worth repeating, anyone using the 3G yellowsn0w soft unlock should definitely avoid the official update at all costs. The baseband cannot be downgraded, so if you update to the new baseband, you are stuck there without any known way to inject the yellowsn0w unlock.

So there you have it. If you’re happy with your jailbroken/unlocked iPhone 3G at the moment and everything is working great, leave it alone. If you don’t care about the jailbreak/unlock, update away in iTunes, especially if you’ve been running into problems with your iPhone.

For me, I’m going to hold off on this mini update as I’d like to see what the Dev Team will report after checking out the firmware. Although everytime a firmware update is released, my fingers are always itching to press UPDATE!

If you’ve updated to 2.2.1 firmware, how is it so far? Any noticeable changes? Let us know!!