For the jailbreakers out there, the Pangu Team released a semi-tethered jailbreak for iOS 9.3.3 and iOS 9.3.2 on the weekend.

Semi-tethered means if you reboot your device (or run out of battery), the jailbreak will be removed. However, in order to get this jailbreak back, you don’t require a computer as you just need to re-run the Pangu jailbreak app on your iOS device. 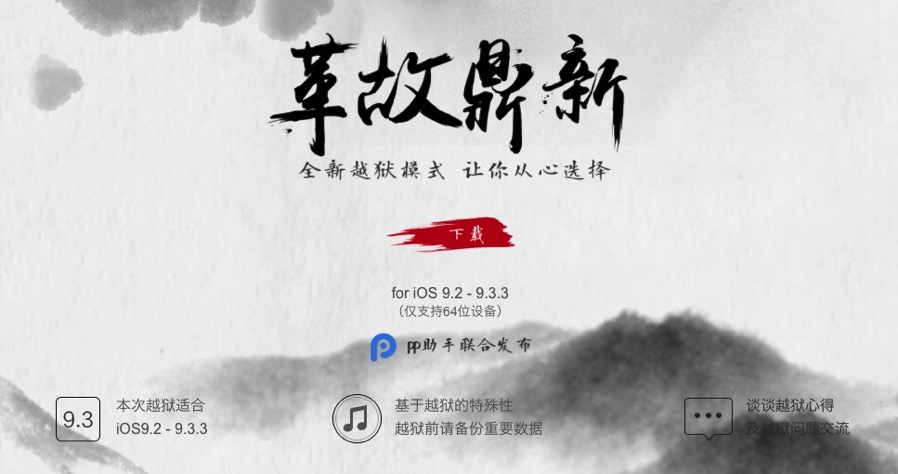 The following jailbreak only works for iPhone 5S and above (64-bit devices), iPad Air and iPad mini 2 and above. As with any new jailbreak tool release, Pangu has released a PC version first, and so far it’s only in Chinese. Click here to download it.

The following video by EverythingApplePro shows the step-by-step process. Users are required to run the Pangu tool on their PC, following the steps, and even requiring entering in their Apple ID credentials, which is something we would advise against.

Now, the iOS 9.3.3 jailbreak can also be jailbroken without a computer, too, similar to Comex’s JailbreakMe Safari browser exploit from ages ago.

All you have to do is visit http://webflames.net/Jailbreak/ and do the following steps, according to the website:

4. Press on the check box to uncheck the option below the circle, then press the circle in the middle of the screen

5. Press the power button once to turn off the screen

6. Let notifications popup, and wait for the device to reboot automatically

7. After the reboot, check to see if Cydia has been installed

Again, the jailbreak can be shady as you are asked to trust a random certificate to be installed on your device, but this method does not ask for Apple ID credentials.

Here’s a video of the process below:

Again, if you’re into jailbreaking and the potential risks involved, these are two ways to jailbreak iOS 9.3.3 right now. Expect an English version of the tool to come soon, and a version for Mac users as well. But with all fresh jailbreaks, it’s best to wait a few days or even a week to try it, to let bugs and other issues smooth out.