Pretty much since the launch of the iPhone in 2007, users have wanted to create photo albums on their iPhone. iPhoto on the Mac lets you easily do it, various Windows photo software lets you do it, so why not on iPhone?

Currently, the only official way to create and manage photo albums on your iDevice is to manage those albums on your PC or Mac and then sync via iTunes. Well, there is good news!

For those who own a jailbroken iPhone or iPod touch, a new Cydia tw 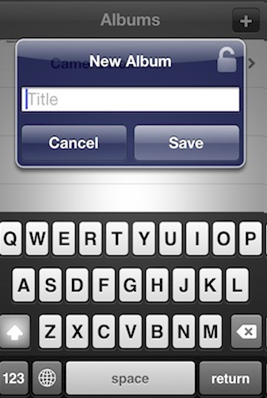 Once installed, the tweak adds a â€˜+â€™ symbol in the Photos app which allows the creation of both photo albums and password protected albums. Once created, photos can be moved from the camera roll to the album and from the album to other albums or the camera roll. Albums can further be deleted with a swipe gesture.

PhotoAlbums+ also seems to sync perfectly with iTunes, so there shouldn’t be issues with managing existing or new new photos from your computer.

If you’re looking for this kind of functionality, PhotoAlbums+ is available in the Cydia Store for $2.99.