Record Your Skype Calls With CallRecorder for Skype [Cydia] 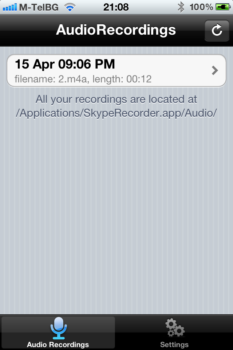 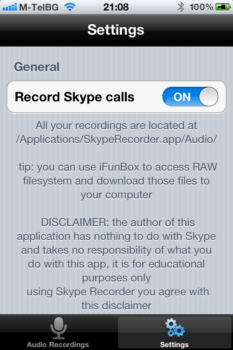 Have you ever had a reason to record your phone calls? Maybe to record a prank you’re playing on some one? Maybe to collect incriminating evidence? With a new tweak for your jailbroken iPhone, you can now record your Skype calls. The tweak is simply called “CallRecorder for Skype”. Very minimal settings allow you to turn it on or off, and it will automatically record you Skype calls and save them on your iPhone. You can play them back right in the app, but if you want to retrieve the recordings from the device, you’ll need to use SSH, or a USB method to save the recordings to your computer.

Record Skype calls to audio file directly on the device. Tip: if you have Skype credit you can record even mobile phone calls! No subscriptions, pay once use for life. Supports all devices with iOS 4.x and 5.x

As you may notice in the screenshot, the author of this tweak is not affiliated with Skype and takes no responsibility for what you might do with the recordings. The person on the other end of your calls may consider this an invasion of their privacy.

CallRecorder for Skype is available in Cydia now, for $6.99. That’s a bit steep for me, but if you need to record your Skype calls, there isn’t another choice. It is a one time purchase with no extra fees. If you have a paid Skype account, you can also record your regular mobile phone calls. That might make the price worth it, for some.