Couple of days back, @MuscleNerd of Dev-Team made an announcement on twitter regarding an upcoming major Redsn0w jailbreak tool overhaul. Today, that update has been released which brings tons of new features. Redsn0w 0.9.9b1 supports all current iOS devices except the iPad 2 and can jailbreak iOS 5, iOS 4.3.5 as well as iOS 4.3.3 among the latest firmwares.

While it doesn’t yet bring the much awaited untethered iOS 5 jailbreak support, it does add some exciting new features including the ability to automatically detect and download required IPSW files directly from Apple’s servers in order to jailbreak the connected iOS device. Once downloaded, the firmware file is stored in program’s cache for all future jailbreaks. 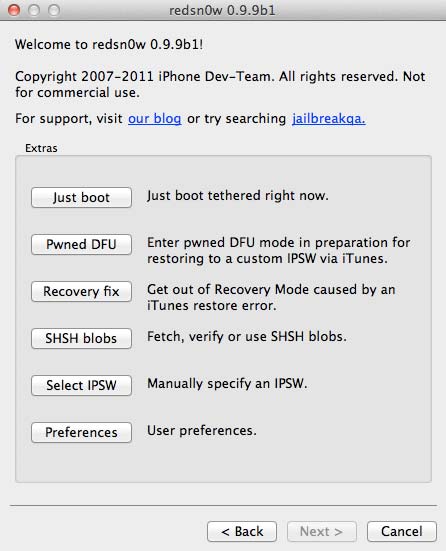 RedSn0w 0.9.9b1 is now available for download for Mac OS X and Windows systems. Below is the complete change log: