Update 1 (23:43 PST): Looks like links for redsn0w for Mac and redsn0w for Windows has been released.

MuscleNerd from the iPhone Dev Team has announced on twitter that an update to redsn0w is coming soon. This updated version (the current version is for the iPod touch 2G/iPhone 3G only) will allow Windows users to install a custom IPSW on their iOS devices, just like PwnageTool 4.1 for Mac users.

This new version of redSn0w will offer pwned-DFU mode via limera1n to achieve custom IPSW installs for Windows users. So if you’re using a PC, and have been bugging your Mac friends to “borrow their computer” looks like your nagging will soon come to an end.

Why use PwnageTool or redsn0w? Why install a custom made IPSW? After restoring with one of these custom firmwares, your iPhone will be jailbroken while retaining earlier versions of the baseband (so you can still unlock via ultrasn0w and use any SIM carrier you wish). 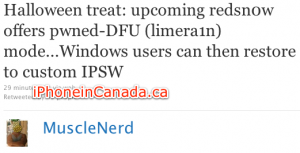