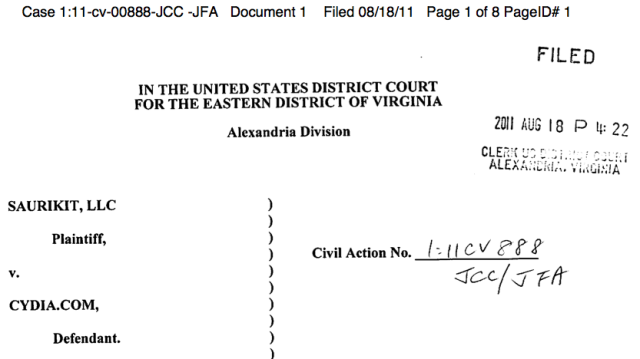 It appears Jay Freeman a.k.a. “Saurik”, the creator of the Cydia jailbreak store, has filed a lawsuit to acquire the domain cydia.com from a company named Cykon, as reported by Domain Name Wire.

Freeman’s first attempt to acquire the domain failed as it was determined Cydia.com was registered in 2002, years before the creation of the Cydia store, as determined by a Uniform Domain Name Dispute Resolution Panel (UDRP) back in March.

In his lawsuit filed August 18th, Jay Freeman mentions Cydia’s federally registered trademark is being infringed upon by Cydia.com. Various unsuccessful attempts were made to contact the owners of the domain. It wasn’t until December 18, 2008 did a meeting with Cykon representative named “Peter” take place, except the terms were to release Cydia.com only through demands of profit-sharing from Freeman.

Obviously Freeman objected to this, and as a result Cydia.com become a parked page, and eventually an Apple forum, as it currently exists. Freeman decided to file a lawsuit again Cykon, and this is where the case stands today.

You can take a look at the full PDF filing here.