Attention all Windows users! You can now jailbreak your iOS devices running iOS 5 beta 5 with the just released Sn0wbreeze 2.8 b5. The latest version of Sn0wbreeze addsÂ support for device hacktivation and can also bypass device UDID registrationÂ checkÂ which is required for activation of any iOS 5 beta release. Also, the expiry dates will be removed once you build your iOs 5 beta 5 custom firmware using sn0wbreeze 2.8 and you can run the beta for as long as you want. Like always, this will also preserve your current baseband which, if supported, can be unlocked using ultrasn0w. 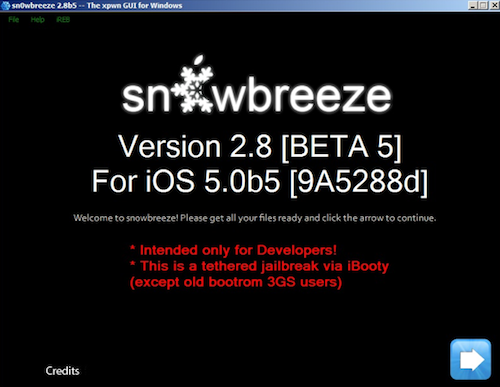 Like previous iOs 5 beta jailbreaks, this is also a tethered jailbreak for all devices except iPhone 3GS with old bootrom which can be jailbroken untethered. Also, the exploit does not work with iPad 2 which can only be jailbroken on 4.3.x using JailbreakMe 3.0 by Comex.

You can download Sn0wbreeze 2.8b5 using the official link below:

Sn0wbreeze 2.8B5 for Windows