Sn0wbreeze 2.8b4 for Windows has beenÂ releasedÂ by iH8sn0w. The update enables users to jailbreak their iOS device on iOS 5 Beta 3.

This jailbreak tool is the Windows equivalent of PwnageTool (Mac only). Users should use sn0wbreeze if they want to update to iOS 5 Beta 3 safely but keep their existing baseband. 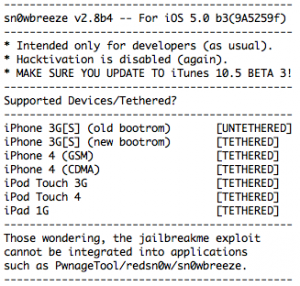 Sn0wbreeze 2.8b4 supports a mostly tethered jailbreak for iOS 5 Beta 3 and supports the following devices: