The Dev Team has already released an update to Redsn0w following the public release of iOS 5.1 earlier this week and now, Windows exclusive jailbreak tool Sn0wbreeze has been updated to support Apple’s latest firmware. Sn0wbreeze v2.9.2 can now jailbreak iOS 5.1 on A4 devices by creating custom jailbroken firmware files. Newer devices with A5 chip i.e iPad 2 and iPhone 4S are currently not supported. 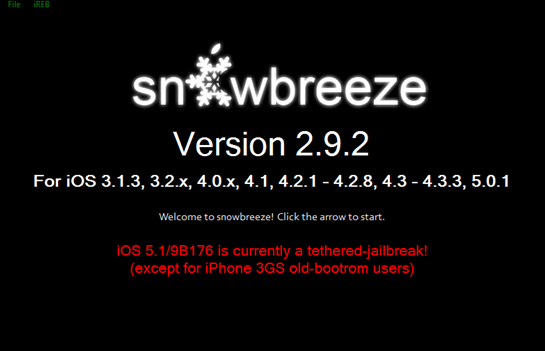 Below is a list of devices supported by Sn0wbreeze v2.9.2:

Once again, this is only a tethered jailbreak solution except for iPhone 3GS with old bootrom, meaning each re-start / reboot requires the jailbroken device to be plugged into a computer to allow “tethered booting” into jailbroken state.

Those who rely on software based carrier unlock and therefore prefer updating with custom firmware solutions such as Sn0wbreeze, please note that Ultrasn0w has not yet been updated to support iOS 5.1.