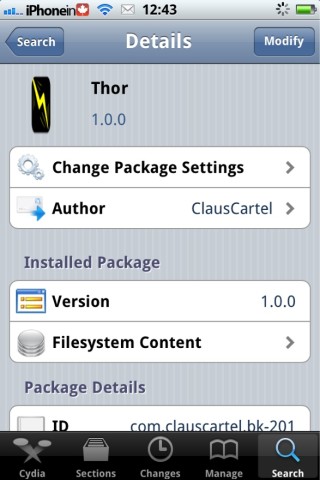 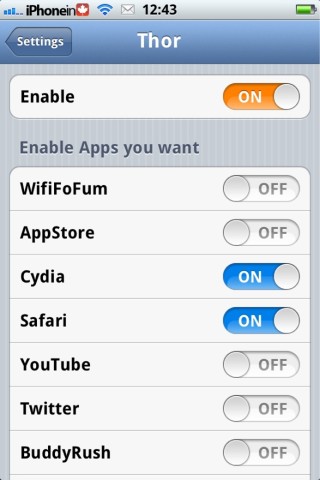 Some iPhone, iPod Touch, and iPad users will keep their WiFi turned off until it’s needed, either to save battery, avoid annoying pop ups letting you know when you’re near a hot spot, or some other reason.  Then when they do need WiFi on, they have to manually go into the Settings app and turn it on.

There is a tweak in Cydia that came out last week called “Thor”, that will automatically turn on your WiFi for you, when you open select apps. Once installed, you go into the Settings app, enable Thor, and then select which apps you would like to trigger the tweak. Then you can leave your WiFi turned off, and when you open the selected app, the WiFi will turn on.

For this tweak to work, you’ll have to have your WiFi network already saved in settings, or you will just get a pop up asking you to select a WiFi network. Also, I assumed this would turn off your WiFi for you, upon exiting whatever apps you selected, but this was not the case for me. I still had to manually go into to Settings and turn it off when I was done.

Thor turns on wifi for you, you just have to activate it and activate the application you want in the setting and you never have to manually turn on wifi!!

I actually leave my WiFi on all the time, so I didn’t find this tweak particularly useful, but some of you might. You can get Thor in Cydia for free, in the Big Boss repo.