While Pod2g says there is a lack of innovation on Apple’s side when it comes to the new features introduced with iOS 6, the jailbreak community seems to be far more responsive to user demand and jailbreak tweaks, and ideas are growing alongside iOS itself. So, in case you have spent 15 minutes of your day drinking coffee and jailbreaking your iDevice using evasi0n (maybe with the help of our tutorials) here are the top ten tweaks you’ll enjoy. 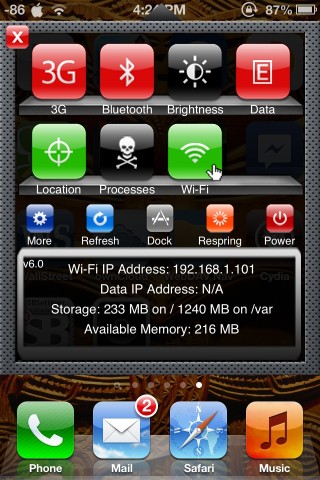 Stride ($2.99)
In case you envy Android users who can unlock their device with a gesture, there is an app for that called Stride. And yes, it is available in the Cydia store. Update: Still waiting for iOS 6.1 support.

Dashboard
For those who have missed live widgets, here is a jailbreak app you’ll enjoy: Dashboard. Once installed, you can start adding custom widgets that float next to app icons on your iDevice’s Home screen.

Battsaver ($2.99)
Yes, battery life isn’t just your main issue, it’s everybody’s. Fortunately, there is an app for that one as well: BattSaver regulates the way you use your iDevice. It uses several different strategies to preserve battery life by following your usage pattern and turning parts of you iPhone off when you don’t need them, and on again when you do.

iFile ($4.00)
This app is one of the key apps for every power user. It’s like bringing the Mac OS X Finder to iOS or Explorer for Windows.

Messages+ ($7.99) (or BiteSMS)
If you want to compose an SMS to anyone from any app, or reply to a message without closing the app you are using, Messages+ is the app for you.

Auxo ($1.99)
With your iDevice capable of multitasking, switching between apps is easy, but iOS displays a row of icons. Auxo re-imagines the switcher in the way that Apple should do with iOS 7.

Emblem ($1.99)
This jailbreak tweak is iPad-only and allows you to interact more intuitively with notifications. Notifications will appear as banners on the right side of the screen like they do in Mountain Lion.

Winterboard (free)
If you want to customize the overall look of the lock screen and home screen, there is no better way to do it than with Winterboard. There are tons of awesome pre-made themes available through Cydia, so take your time and pick up one that suits you if you don’t feel like preparing one yourself.

SBSettings (free)
If Auxo isn’t your thing, then you can always go back to one of the most popular jailbreak tweaks of all time–SBSettings. This tweak allows you to quickly toggle various iOS system settings such as Bluetooth, WiFi, brightness, 3G, EDGE, Airplane Mode, etc. Just swipe the top bar of your screen or see toggles within Notification Center.