[Update] Unofficial Swype for iPhone is Now Available in Cydia

Swype developed a way of typing on a touchscreen keyboard by sliding your fingers across keys and letting its unique auto correct work its magic. We’ve seen a Swype versus iPhone typing test before in the past, but for iOS users the reality of Swype for the iPhone has never come to fruition–until now.

Jailbreak developer Andrew Liu (@WyndWarrior) has ported an unofficial build of Swype and it landed in Cydia yesterday. This ‘beta’ version of Swype will only work in native iOS apps (ie Mail, Safari, Notes, etc), and not App Store or Cydia apps. Also missing is the iconic blue Swype tracer line as you type. 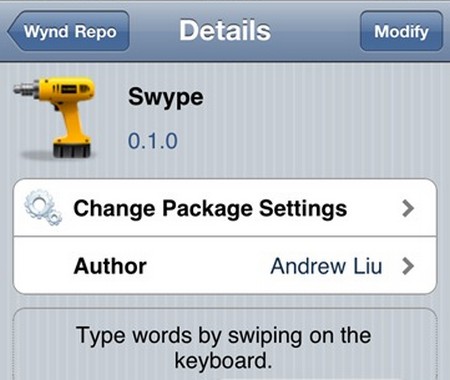 How to add Swype to your jailbroken iPhone or iPad? Just add the following repo as a source in Cydia: wynd.x10.mx/repo

Swype has responded to this unnofficial version in an interview with Geekwire. The reason Swype hasn’t landed in iOS is due to the lack of keyboard APIs in the SDK. As for the unofficial Swype version released by Liu, Swype CEO Mike McSherry had this to say:

â€œI donâ€™t know but it appears he wrote some of his own code to emulate a Swype-like experience and is using our brand,â€ he said. â€I donâ€™t know if this is a â€˜hackedâ€™ version of Swype or notâ€¦.Iâ€™m thinking not.â€

…and more from Swype’s PR team:

The first thing we want to make clear is that this version released via Cydia is not in any way an official Swype product, or related to SwypeInc. in any way. It appears this developer wrote some of his own code to emulate a Swype-like experience and is using our brand. We donâ€™t know if this is a â€˜hackedâ€™ version of Swype or not. Iâ€™m thinking not. We are still investigating, but either way, this is not an official release or port of Swype to iOS. Additionally, since we weren’t involved with the development of this application, we can not vouch for the integrity of the software. From a consumer’s perspective, we recommend researching the developer on your own to ensure the trustworthiness of this application from a security standpoint.

Check out this demo of Swype on the iPhone posted by iDB and made by Jeff from JailbreakMovies:

Let us know how you’re liking this beta version of Swype!