Just minutes ago, @posixninja of the Chronic-Dev Team has tweeted that people interested in working for them can submit their CVs to admin@chronic-dev.com. To refresh your memory, Chronic-Dev Team is a group of iOS hackers/enthusiasts from all over the world. The team was established in 2009 and over time they have produced many jailbreak tools including the famous Greenpois0n.

Earlier this week, @pod2g of Chronic-Dev Team confirmed that their team is already working actively on getting an untethered iOS 5 jailbreak out by the time iOS 5 goes public. Just yesterday at MyGreatFest, @p0sixninja announced that almost 5 new jailbreak exploits have been discovered in iPad 2 which can possibly be used in the jailbreaking of upcoming iPhone 5 as well. 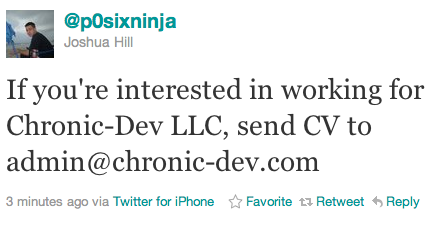 With @Comex already leaving the jailbreak scene to work for Apple and @MuscleNerd suspiciously being approached for a possible job invitation by Apple, today’s hiring announcement from Chronic-Dev Team clearly indicates their group is doing its level best to continue the jailbreak development and for that they need all the help they can get. So if you think you’ve got the skills, you should contact @p0sixninja at the above mentioned email right now!