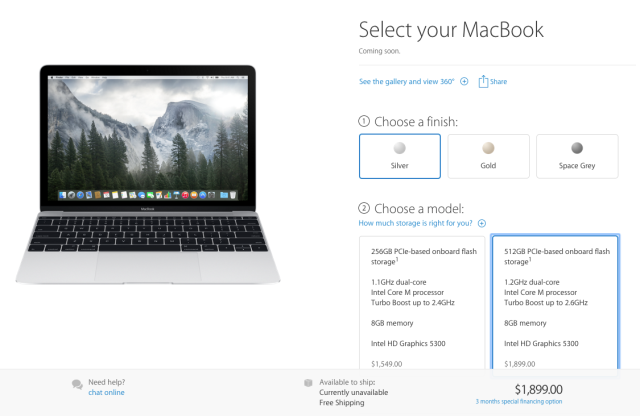 Earlier last month, during the “Spring Forward” media event, Apple unveiled the all-new 12-inch Retina MacBook. The shiny new laptop will be available for purchase starting tomorrow, so the first press reviews are in, just in time to help you make a decision.

The consensus seems to be that Apple indeed took a huge step forward with the new MacBook. It is the laptop of the future, they say. The only problem with the future is that it isn’t here yet, but those using the MacBook for review, like Dieter Bohn of The Verge, can hardly wait for the future to come.

To give you a look at the MacBook from the perspective of the select journalists who had the chance to use it, we’ve picked out tidbits from several reviews. We’ll update the post as other reviews appear.

We know what this is: This is the 2008 MacBook Air. Today, the MacBook Air is frequently cited as the best laptop on the market — but the first model, in 2008, was also called overpriced, underpowered, and amazing-looking. In the same way, the 12-inch MacBooks of 2016 and 2017 will lose their flaws, enter a new era of USB-C compatibility, and seem much more at home in a more wireless world.
Even Apple is allowed to start with a 1.0 version. But you don’t have to buy it.

With the new keyboard and trackpad innovations, lust-inducing industrial design, and impressive downsizing of internal components, the MacBook feels like a an important next step in the evolution of portable computers. But this machine isn’t for everyone, particularly those who expect extremes from their devices. Still, if you prioritize style, need something ultraportable, and don’t mind trading power for a crisp and clear Retina display, then the perfect computer may have arrived.

It’s nearly impossible not to be seduced by this MacBook’s beauty, its dazzling screen and perfect trackpad. But don’t give in. Like the original MacBook Air, introduced in 2008, there are too many key compromises—in battery life, speed and port access—for the early-adopter price.

It doesn’t cater to exactly the same audience as any existing Mac. It’s a really good laptop—assuming you can figure out how to make USB-C make sense for you—and yet its size, weight, and overall minimalism give it an iPad-like persona. The thinking behind it is a different, more subtle way of mixing PC and tablet than all those other devices that try to be both at once. But like the original 2008 MacBook Air before it, this specialty Mac could also be a blueprint for the next generation of mainstream notebooks.

You see, the problem with the future is that it isn’t here yet. Instead we live in the now, and the now doesn’t have the ecosystem of adapters and wireless peripherals I need to use this laptop with its single port. The now doesn’t have the right processor to power through the apps I need without ruining battery life. And right now, this laptop is far from cheap at $1,299.

David Pogue of Yahoo! Tech made an interesting point in his video review of the MacBook: you may compare this device to other laptops, but the device really shines compared to the iPad, as in its current form (due to processing power limitations) it will fit well with people who frequently read, type, and watch videos while they are travelling. Well, it certainly seems stripped down compared to another Apple laptops, but when you compare it to the iPad, “that thing is really amazing,” Pogue concludes.