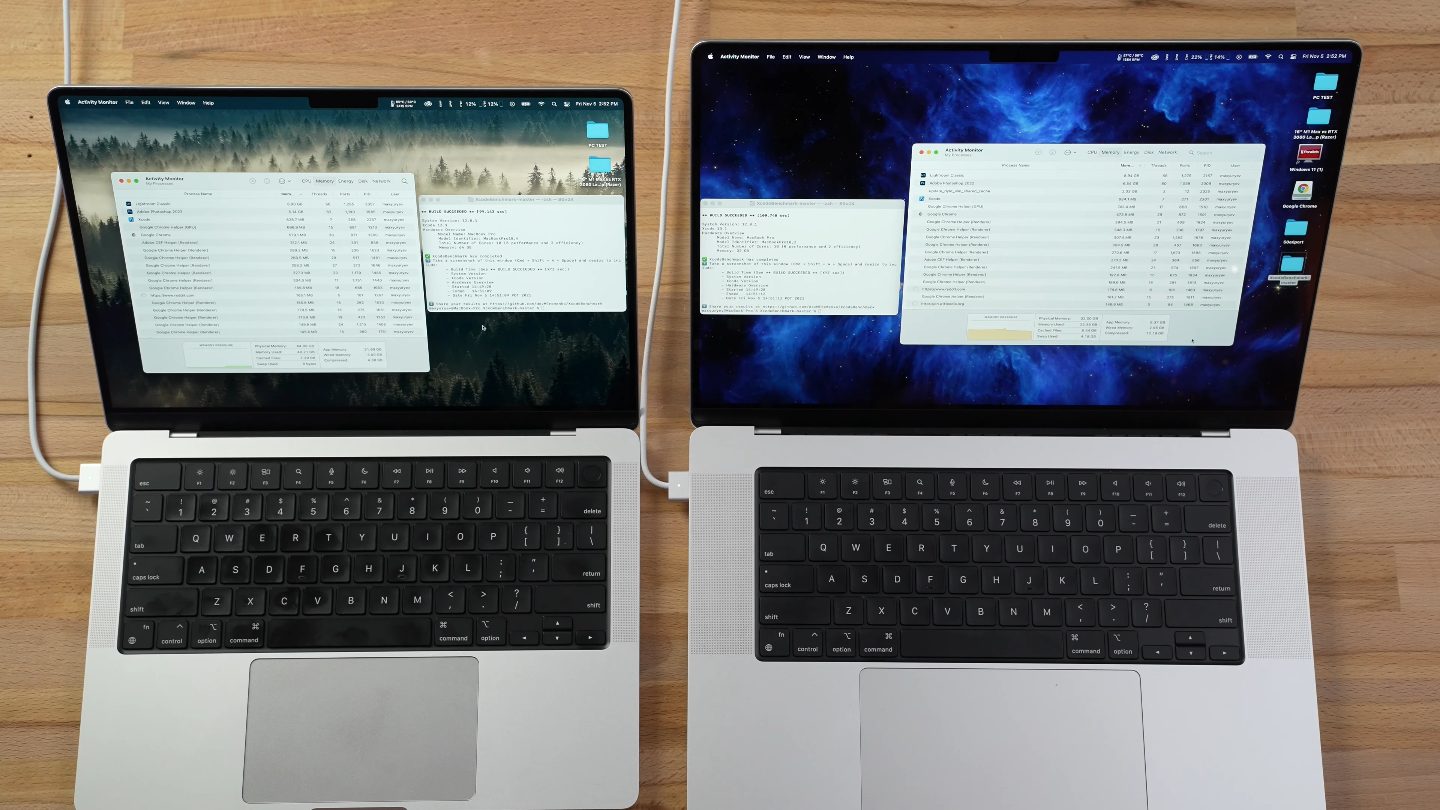 Apple’s new 14″ and 16″ MacBook Pro models are powered by next-generation M1 Pro and M1 Max chips. On both sizes, the M1 Max can be configured with either 32GB or 64GB of Unified Memory (Apple’s fancy-pants term for a pool of RAM shared by both the CPU and GPU).

After testing RAM configurations on the M1 Pro chip, which can be configured with either 16GB or 32GB of RAM, tech YouTuber Max Tech found that 32GB of Unified Memory offered the best price-performance value, even though 16GB does exceptionally well and matches performance in almost all scenarios.

Max Tech tested performance and responsiveness, both at baseline with no apps running in the background, and with the RAM for each variant completely full.

The YouTuber started by opening some 30 memory-hogging Chrome and Safari tabs on both notebooks.

The browser tabs remained open throughout all of the Adobe Photoshop, Adobe Lightroom, Xcode, Blender, video editing, Virtual Machine, Geekbench 5, Logic Pro, and 8K video editing tests that followed, with each app staying open as he moved to the next.

The MacBook Pro with 64GB of RAM was 33% faster in rendering a heavily memory-intensive project in Blender, with a ton of apps still open in the background on both notebooks. The task was specifically designed to push memory usage to the max and is unlikely to be part of most real-world workloads.

Other than that, however, both configurations delivered identical performance, with the only difference between them being how much of the RAM’s contents they had to ‘Swap’ into the SSD when they started running low on memory.

Even with RAM pushed to the limit, both notebooks handled themselves exceptionally well. Both MacBook Pros were extremely responsive, even at 100% RAM usage. No browser tabs had to be reloaded at the end of the stress tests, and content left playing in the background at the beginning was still playing.

The 2021 MacBook Pro models’ mind-blowing performance as compared to older Intel-based Macs (even ones with more RAM), is in mostly thanks to the increased memory bandwidth from having Unified Memory, and due in part to Apple’s new, incredibly fast  SSDs as well.

Both the 32GB and 64GB configurations see a 10-15% dip in performance under sustained workloads when RAM is full, such as when exporting 8K video, but still maintain responsiveness.

“The 32-gig is performing shockingly well,” said the YouTuber in conclusion. 32GB appears to be the sweet spot for the 2021 MacBook Pro, except of course for some unlucky users experiencing memory leak issues on the new notebooks — they’re going to need all the RAM they can possibly get.

32GB is the configuration you should go for unless you know for a fact that you’ll be siccing the notebook on some absurdly memory-heavy tasks such as advanced 3D/VFX rendering, running 10-20 Virtual Machines at once, or the like.

Most users would be better off saving the $500 and putting it towards something else — an SSD upgrade, perhaps?

Click here to order your 2021 MacBook Pro today from Apple.ca.