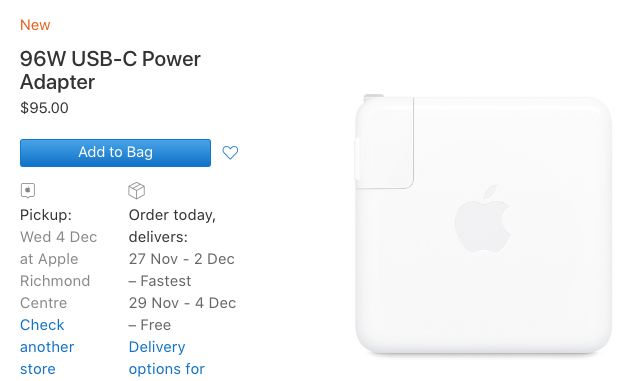 The previous USB-C Power Adapter with MacBook Pro was at 87W, so this is a 9W difference. According to Apple:

The 96W USB-C Power Adapter offers fast, efficient charging at home, in the office or on the go. While this power adapter is compatible with any USB-C–enabled device, Apple recommends pairing it with your 16-inch MacBook Pro for optimal charging performance.

The newer charger’s physical size remains the same as the previous one. The extra juice provided by this charger, according to Dave Lee’s hands-on, says the system can now use the extra wattage and dissipate it properly.

The 16-inch MacBook Pro has a 100 Wh lithium-ion battery inside, the maximum allowed to fly with on a plan in the United States, as per TSA guidelines.

You can buy this 96W USB-C Power Adapter on Apple.ca today, with pickup available on December 4 and first deliveries arriving from November 27 to December 2.