Yesterday, Apple introduced Fusion Drive, an innovative new storage option that gives the performance of flash storage and the capacity of a standard hard drive, during the 2012 iMac & updated Mac Mini unveiling at the media event. AnandTech explains how Apple is attempting to offer the best of both worlds with its new Fusion Drive. 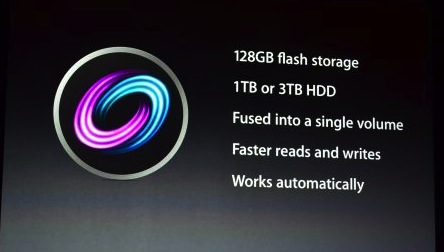 Both the new 2012 iMac and Mac mini can be outfitted with a Fusion Drive option. It combines 128GB of NAND flash with a standard 1TB or 3TB hard drive to create a single storage volume that intelligently manages files to optimize read and write performance. According to the source, the “Fusion” part comes in courtesy of Apple’s software that takes the two independent drives and presents them to the user as a single volume.

Apple claims that by default the OS and all preloaded applications are physically stored on the 128GB of NAND flash. But what happens when you go to write to the array? AnandTech explains how it works:

With Fusion Drive enabled, Apple creates a 4GB write buffer on the NAND itself. Any writes that come in to the array hit this 4GB buffer first, which acts as sort of a write cache. Any additional writes cause the buffer to spill over to the hard disk. […]

That 4GB write buffer is the only cache-like component to Apple’s Fusion Drive. Everything else works as an OS directed pinning algorithm instead of an SSD cache. In other words, Mountain Lion will physically move frequently used files, data and entire applications to the 128GB of NAND Flash storage and move less frequently used items to the hard disk. After the copy is complete, the original is deleted and free space recovered.

After a few accesses Fusion Drive should be able to figure out if it needs to pull something new into NAND. The 128GB size is near ideal for most light client workloads, although I do suspect heavier users might be better served by something closer to 200GB.

The source believes that a 128GB NAND component Fusion Drive should work reasonable well, though we’ll need to wait and see try it out once the new iMac with Fusion Drive launches next month.