Yesterday, Apple introduced an update to its MacBook Air notebook lineup at the WWDC opening event, and folks over at AnandTech have already got their hands on the latest models. While initial benchmarks from Primate Labs have revealed modest performance improvements, thanks to Intel’s new Haswell processors, it appears that the most significant performance boost in updated MacBook Airs comes from the new PCIe based flash storage. 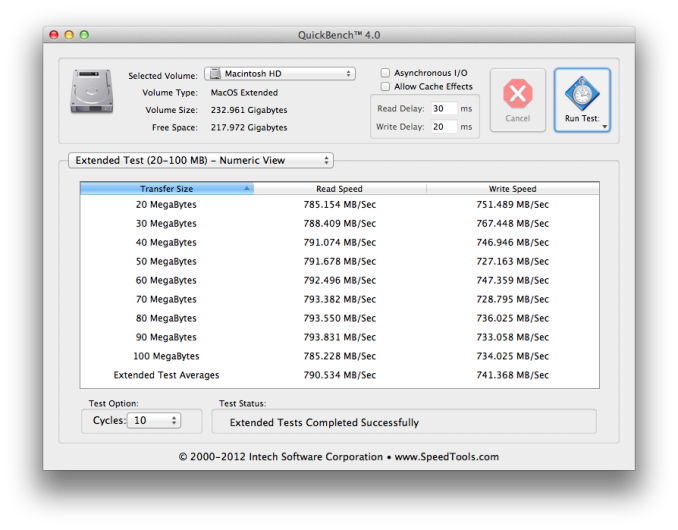 While the battery capacities haven’t changed with the new models i.e at 35Wh and 50Wh for the 11 and 13-inch models, the 13-inch model is said to boast an average of 12 hours of use, while the 11-inch model will provide 9 hours of uptime, owing the power improvements to Intel’s latest chips. As far as the speed boosts are concerned, tests reveal that that the new ultrafast PCI Express connectivity offers peak sequential read/write performance of nearly 800MB/s. In contrast, previous MacBook Airs used the SATA interface, which maxes out at 600MB/s.

“The drive in my system uses a Samsung controller, although I’ve heard that SanDisk will have a PCIe solution for Apple as well. A quick run through Quick Bench reveals peak sequential read/write performance of nearly 800MB/s. This is a pretty big deal, as it is probably the first step towards PCIe storage in a mainstream consumer device that we’ve seen. I’m still awaiting official confirmation as to whether or not this is an M.2 based solution or a proprietary connector. Update: It’s a custom Apple design, not M.2. Since there’s no PCIe routed off of the CPU in Haswell ULT, these 2 lanes come from the on-package PCH.

The other big change is the move from DDR3L to LPDDR3, a new feature supported by Haswell ULT. I need to go back and dig through the Haswell ULT datasheets again, but I believe the total memory interface width remains at 128-bits wide even if you use LPDDR3 – you just get lower power consumption”.