Some consumers were lucky enough to get an unexpected surprise from Apple just the other day: Although they have ordered a top-of-the-line (but) non-Retina 27-inch iMac, the company has automatically upgraded their orders to the new, cheaper Retina 5K iMac. 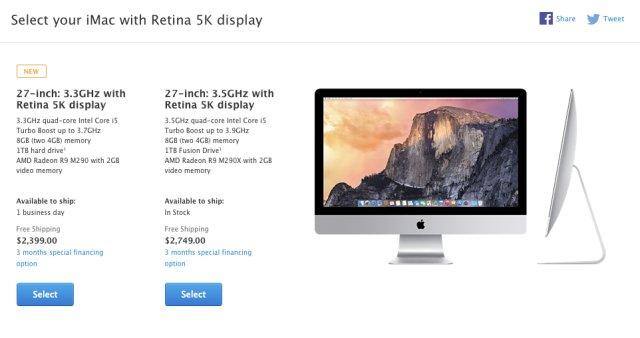 Apple announced yesterday the launch of a new 27-inch Retina 5K iMac matching the retail price of the high-end, non-Retina 27-inch iMac. The news was spotted by AppleInsider: a Reddit user said that he had received an email from Apple informing him about the announcement and the automatic upgrade. There is a trick though: He was expecting an NVIDIA GeForce GTX 780M 4GB GDDR5, but the 5K model he will receive includes an AMD Radeon R9 M295X 4GB GDDR5 video card.

Is anyone else waiting on a new iMac and got this upgrade message? “You may not have heard, but we just announced the new iMac with Retina 5K display. Since your order has yet to ship, we automatically upgraded you to the new iMac with Retina 5K display.” I am happy about the upgrade… but I am skeptical. This “upgrade” also includes an AMD Radeon R9 M295X 4GB GDDR5. I was expecting the NVIDIA GeForce GTX 780M 4GB GDDR5. Maybe I am wrong but as a video producer I am worried that I am getting an inferior video card at the expense of this display upgrade. Any thoughts from the video, 3D, gamer or just Apple heads about there?

Meanwhile, due to conversion rate fluctuations, Canadians haven’t got the price cut US users can enjoy.