When the iPhone 4 launched in Canada, aside from being able to purchase the device on contract with a subsidy, Apple also released the availability of unlocked iPhones.

The unlocked iPhone 3GS and iPhone 4, purchased for full price ($549/$659/$779) without a contract, provides users with the flexibility to use any wireless carrier they wish. However, in the case of the iPhone 4, so long as the carrier supports micro-SIM (but you could always cut a regular SIM).

When the unlocked devices hit the Apple Canada Online Store, many users were confused at Apple’s verbiage to describe the devices. Instead of simply saying â€œunlockedâ€, Apple chose to first say â€œSIM-freeâ€ which then eventually turned into â€œcommitment-freeâ€.

While commitment-free makes more sense than SIM-free, the verbiage can still be confusing, especially since â€œunlockedâ€Â is mostly universally understood and the majority of Apple Retail staff are simply saying â€œunlockedâ€.

On the back of this, today Apple has made a tiny change to its online store page for iPhone. In one section, instead of using commitment-free to describe an unlocked iPhone, Apple has simply used the word â€œunlockedâ€:

Your new iPhone. Direct from Apple and commitment-free.

Your new iPhone. Direct from Apple and unlocked.

However, even with this small change, other areas of the store page still indicate â€œcommitment-freeâ€, so this could be the beginning of a larger, overall update. 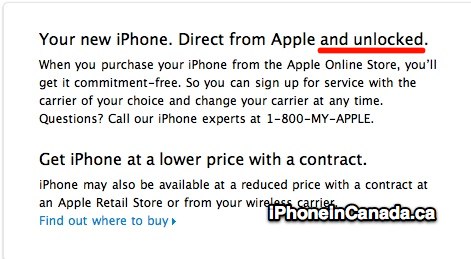