Apple tops the latest American Customer Satisfaction Index (ASCI) in the Personal Computer, laptops and tablets category. And it has done so for the past decade, according to the report issued yesterday. 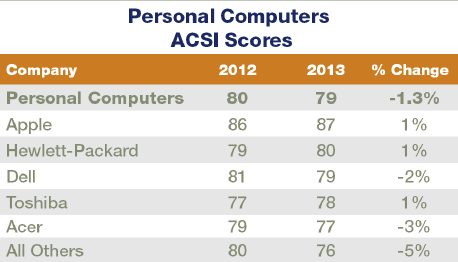 The category includes both PCs and post-PC devices, and Apple has managed to remain at the top, receiving a consumer satisfaction rating of 87 (up 1), above Hewlett-Packard and Dell, which scored 80 and 79, respectively.

Apple maintains the strong lead it has held for a decade, inching up 1% to an ACSI score of 87. Still, Apple’s position might be a bit more precarious in 2013. While iPhone sales are rising, shipments of Mac PCs declined and iPad sales are slowing, pointing to possible saturation in the tablet market. Nevertheless, even as Samsung and other manufacturers of Android-based devices make inroads, Apple continues to dominate in the U.S. market, with iPads accounting for about 80% of all tablet usage.As the report highlights, the popularity of desktop computers continues despite consumers opting to go mobile, but tablet sales are expected to rise as much as 70% this year, and PC sales to decline 10%.

Apple has seen its Mac sales dropping and iPad sales slowing, which could point to a saturation of the market. Or perhaps consumers are waiting for the new line of desktop computers, as well as the iPad 5 and iPad mini 2.

Last month,  the iPhone 5 has lost its top ranking to the Samsung Galaxy S3, according to the American Customer Satisfaction Index’s annual rankings for smartphone satisfaction in the United States.