With the announcement of Apple’s new iPad, the company announced a new store called the iBooks Store, where users will be able to purchase and download books. Alongside the store comes a new app called iBooks that turns the iPad into an eBook reader.

The iBooks app comes with a virtual bookshelf where users can choose a book to read. Once a book is chosen, the view is akin to an actual book with extraneous items on the side of the book to mimic a real-life experience.

Tapping on the store button on the bookshelf flips over the bookshelf and reveals the store. Here users can view, purchase, and download content. This is similar to iTunes and the App Store, but for books. Once downloaded, the book is placed onto the bookshelf ready for viewing.

Users can navigate the books by skipping chapters, tapping on the right side to flip forward, tapping on the left side to flip back, and using a table of contents. Photos can also be viewed for books that include pictures. The format of the books are ePub, which means that the iPad may be very flexible in allowing users to import their own pre-existing eBooks. 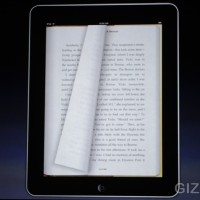 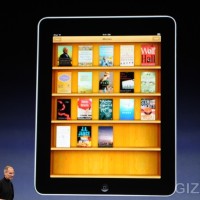 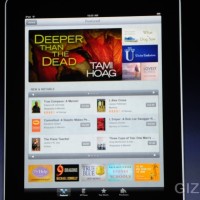