Apple TV units have started to arrive this week. You saw our latest Apple TV unboxing post. There was word before that Apple TV runs iOS and that the latest SHAtter exploit could indeed jailbreak the device.

Well, history has been made as iPhone Dev Team member, Musclenerd has successfully jailbroken the new Apple TV. Here’s what he posted via twitter:

AppleTV 2G SHAttered and jailbroken http://is.gd/fDAbc (not quite sure how to run apps yet!)

Musclenerd also posted a video of the process: 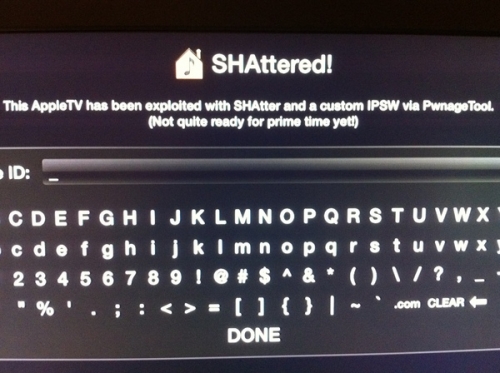 How to Put Apple TV into DFU Mode–Discovered!

There’s even more news on the Apple TV hacking front. Twitter user @StealthBravo figured out how to put Apple TV into DFU mode, via a microUSB cable:

DFU Mode ATV: Plugin with microUSB only and then hold menu+down for 6 secs to reboot, then immediately hold menu+play. http://bit.ly/cp6oPK

This is an incredible development with the new Apple TV (aside from built in Netflix Canada integration). The jailbreak is not ready for a public release yet. Kudos to these guys for figuring this stuff out. Bring on the apps?