First noticed by Mac OS Ken, Apple TV users could see a new ‘Holiday’ content section appearing in the iTunes Store. By going to Movies > Genres > Classics > Holiday Music, Movies and More, you will find what Apple undoubtedly plans to offer its users during the holiday season. 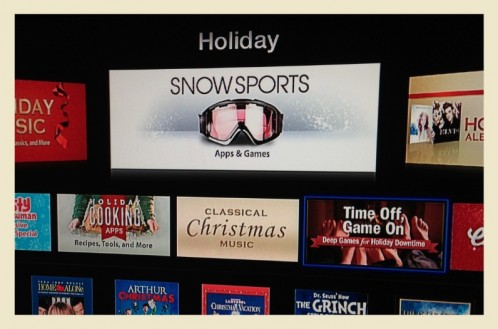 Although the banners are already visible, selecting any of them will take you to an empty page, Mac OS Ken notes. In addition, some links don’t appear to be working at all, such as the Apps for Shopping, 9to5Mac notes. Bringing iOS apps to the Apple TV sound like a bad idea anyways, so this seems like a bug, with Apple displaying iPhone/iPad content on the Apple TV.

As we previously reported, the Apple TV beta includes a new Bluetooth pairing menu, allowing you to connect a wireless keyboard to Apple TV 2 and 3, which will likely become available to all the aforementioned Apple TV users with the next software update.

While analysts are worried about Apple’s stock price, market research companies are  painting a bright future for Apple product sales. However, every analyst (even Gene Munster of Piper Jaffray)  is pushing for a new Apple device — the TV set, which, at least according to some analysts, could push up Apple’s stock price. However, a former Apple executive doesn’t think that’ll happen.

Jean Louis Gassee isn’t convinced that Apple is working on a TV set, although he watched the Tim Cook interview aired by NBC a couple days ago. In his Monday note column, he highlighted a couple interesting facts and expressed his belief that while Apple is highly interested in the TV, the company will likely make a step by pushing the already-on-the-market set top box for re-envisioning content.

“I simply don’t believe Apple will make, or even wants to make, a TV set. To realize the dream, as discussed previously, you need to put a computer — something like an Apple TV module — inside the set. Eighteen months later, as Moore’s Law dictates, the computer is obsolete but the screen is just fine. No problem, you’ll say, just make the computer module removable, easily replaced by a new one; more revenue for Apple…and you’re right back to today’s separate box arrangement. And you can spread said box to all HDTVs, not just the hypothetical Apple-brand set,” he said.