If you haven’t followed Apple patents closely over the years, you may not realize that they’ve filed many patents regarding video glasses. Dating back to 2006, Apple has filed patents similar to Google’s, “Project Glass” glasses; one interesting patent has come into light earlier today. Apple wants to bring their high resolution Retina display to their unreleased video glasses.

We know this isn’t iPhone news, but it’s a large step Apple may take to battle it out with Google. And we have to note, Apple is known to patent any idea that pops in their head. But the idea of video glasses is outright exciting. It seems unimaginable that I could have glasses with the capabilities of setting reminders, talking on Skype, and even sharing pictures. I guess this is what people in the 1990s may have felt when they first bought a computer. 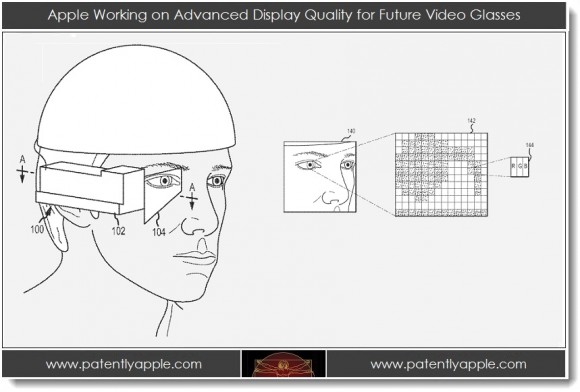 The patent visual is found above, provided by Patently Apple. They note Apple’s glasses would include a much smaller battery than the iPhone and the unit itself would produce Retina display quality. The patent application also stated, “other embodiments may take the form of other types of display devices such as television sets, computer monitors, projection systems, and so forth.”

After viewing the photo above, I know they’re very ugly. But when it comes to patents, companies aren’t required to be specific with the patent drawings. Apple always assures its customers a nice design upon release and I’m sure they’ll do the same with these video glasses (if they make production).

Do you see yourself wearing video glasses in the future? Let us know in the comments.