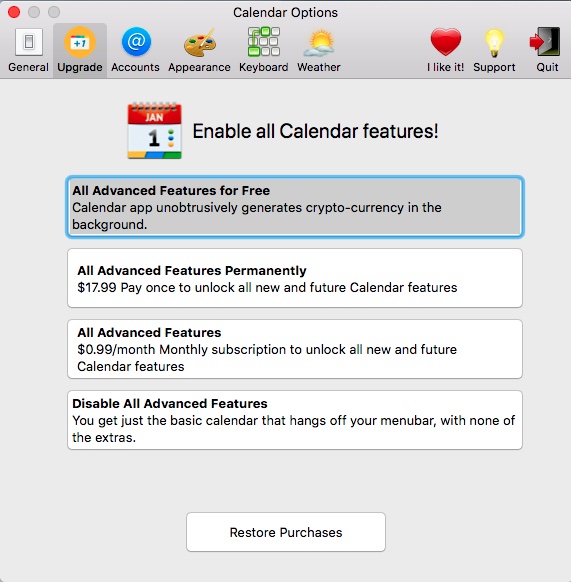 Yesterday, we reported that a Mac app called ‘Calendar 2’, which had added cryptocurrency mining as an alternative to paying for premium features, has been mining Monero coin in the background without telling users. Today, Apple has removed the app from the Mac App Store for violating its guidelines which say apps should be designed to be power efficient (via 9to5Mac).

Qbix CEO Greg Magarshak explained in a statement to 9to5Mac that shortly after the story broke yesterday, Apple removed Calendar 2 from the App Store for violating guideline 2.4.2.

“2.4.2 – Design your app to use power efficiently. Apps should not rapidly drain battery, generate excessive heat, or put unnecessary strain on device resources.”

The app has however been re-listed in the Mac App Store, after Qbix removed all the mining features from it. Furthermore, the company is offering all users of the app a free year of premium features.

During the three day period Calendar 2 was available on the App Store with mining capabilities, Qbix was able to earn about $2,000 worth of the cryptocurrency. In comparison, the company has generated around $700,000 from its apps over the last 7 years.

“However we did generate about $2K (current prices) from the mining that occurred in the 3 day period it was live and we plan to use those proceeds towards improving features for our users going forward,” said Magarshak.

Magarshak also revealed that he and several others have now founded a spinoff company Intercoin Inc, that they hope will solve some of the issues with cryptocurrency.