If you’ve been following the ongoing Apple-EPEAT saga for the past few weeks, you’d know that Apple announced removal of its products from EPEAT’s certification system after which it received quite a back lash from the community. Merely 6 days later, Apple decided to reverse its decision and listed all eligible products back on the registry once again. The list initially did not include the Retina MacBook Pro but now, the EPEAT’s registry is showing 40 Apple products listed, including the Retina MacBook Pro (via 9to5Mac). 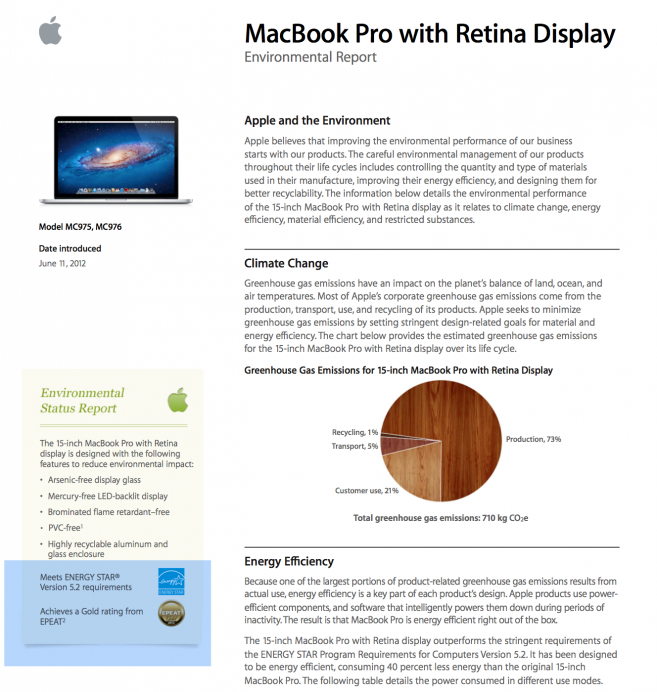 Apple received the full amount of points in the “Product longevity/life cycle extension” category, but it scored zero points in both “Materials selection” and “Energy conservation.” The final amount of points awarded came to 21 out of 27, which still garnered the notebook a Gold standard rating.

The results are interesting, because Apple should have lost in the ”Product longevity/life cycle extension” category if the MacBook Pro truly is the “least repairable laptop.” It seems EPEAT still takes issue with the notebook’s super high-resolution display, though, due to the points missed in the other categories.

One certainly has to wonder what occurred behind the scenes when Apple rescinded and went back to the EPEAT standard.

Why Apple decided to remove its products from EPEAT in the first place is still pretty much a mystery to me!