My first thought as I clicked Apple’s new Force Touch trackpad on the just-refreshed 13-inch Retina MacBook Pro? “Oh, they must not have updated the demo units yet.”

It wasn’t until I checked out the ‘About This Mac’ dialog box that I believed I was actually experiencing this new, unmoving glass slab. I powered off the machine, and the instant the backlight disappeared I whispered a ‘wow’ under my breath as the trackpad went from, well, feeling like the standard MacBook trackpad that we know, love, and have been using since 2008, to a sleek surface that felt as though it would shatter from pressure before it would move even a little.

It’s pretty weird to think about, but one of the craziest things about the new Force Touch trackpad is that it largely feels just like the previous one. Give it to someone who doesn’t follow the industry, and it’s all-but-guaranteed that they’ll have no idea of the ‘magic’ happening right under their fingertips. The clicking sensation comes from the same Taptic Engine that Apple designed for its upcoming watch, which, as Apple notes, allows the trackpad’s force sensors to “detect your click anywhere on the surface and move the trackpad laterally toward you, although the feel is the same familiar downward motion you’re accustomed to in a trackpad.” 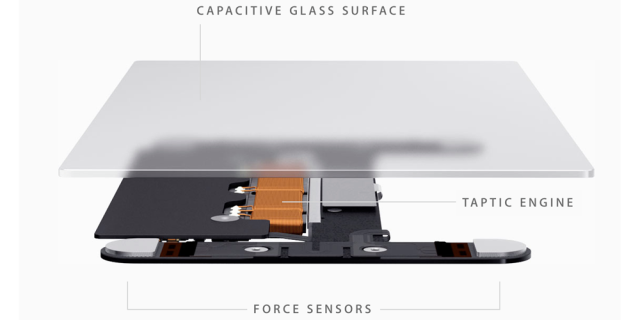 I hadn’t even felt the Force Click yet. The new trackpad, of course, is pressure sensitive, and can offer different functionality based on the context in which you’re using it. Trying to fast forward a video? The harder you press, the faster you’ll scrub through. Don’t know what that word means in the article you’re reading? Rather than tapping on it with three fingers, a more substantial click will pop up a definition. Also, because the click itself is all handled through software you can actually set just how much pressure you’ll need to activate the functionality.

Pretty cool, huh? And we’re not even scratching the surface yet. Apple has quietly added tactile feedback into the latest version of iMovie, as visual artist Alex Gollner noted in a recent blog post:

When dragging a video clip to its maximum length, you’ll get feedback letting you know you’ve hit the end of the clip. Add a title and you’ll get feedback as the title snaps into position at the beginning or end of a clip. Subtle feedback is also provided with the alignment guides that appear in the Viewer when cropping clips.

BetterTouchTool developer Andreas Hegenberg also plans to add Force Touch features to his celebrated utility, and Ten One Design has already added enhanced pressure sensitivity to its app Inklet, noting that “Having a trackpad capable of measuring force is a big deal. Even though Inklet has always been capable of determining stylus pressure, this update makes measuring pressure simpler and more reliable. Kudos to the team at Apple who designed this precise and useful instrument.”

It’ll be very exciting to see what kinds of Force Touch functionality developers can add to their apps and utilities in the coming months, and after extensively testing Apple’s new trackpad earlier today, I’m beyond excited for that new 12-inch MacBook to finally release on April 10th.

Have you had an opportunity to experience the Force Touch trackpad yet? What were your initial thoughts?