Last night Mac OS X users were unable to open their favourite apps (such as 1Password in our case), as a pop up message would read their app “is damaged and can’t be opened”, asking users to delete and reinstall their apps. 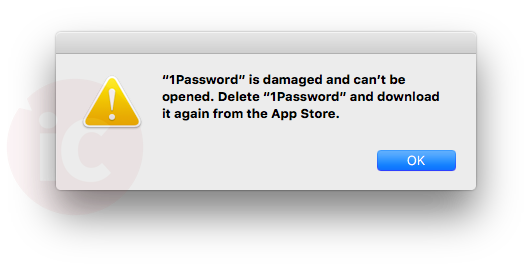 It turns out the cause of the issue was related to security certificates in the Mac App Store, first noted by Tapbots founder Paul Haddad. Certificates for some apps were noted to expire at Nov. 11, 21:58:00 GMT, which caused many apps to no longer open.

Well that would explain the MAS problem. pic.twitter.com/Nuqj9Uxxiz

These security certificates are issued by the Mac App Store to ensure apps purchased can run on a user’s computer, plus prevent installation of malware by using Apple’s developer information.

How to fix this error? Some have noted a simple reboot fixed the issue. But if that doesn’t, drag your application in question to the trash, then re-download and install the app from the Mac App Store. Once we did that, 1Password reopened and everything worked exactly like it did before.

Let us know if you ran into this issue and what fix worked for you in the comments below.