How To Fix Thunderbolt Display Not Charging MacBook Air

My current computer setup involves a 27-inch Apple Thunderbolt Display hooked up to a 13-inch 2012 MacBook Air (and the Das Keyboard for Mac). A while ago I unplugged my MacBook Air to hit the road—only to find out my bloody battery wasn’t fully charged!

Turns out the Thunderbolt Display wasn’t charging my MacBook Air anymore but rather just providing a power source. Talk about a pain in the arse for anyone who needs to get up and go in an instant with their MacBook. The charger that came with my MacBook Air worked perfectly fine though.

A quick search on the web revealed I wasn’t alone with this issue. The culprit? A faulty MagSafe to MagSafe 2 adapter. The Thunderbolt Display’s MagSafe cable requires a Magsafe to MagSafe 2 converter to fit the 2012 MacBook Air.

After calling up Apple, a replacement was sent (despite being outside the warranty window; I <3 Apple) and this fixed the issue right away (they retail from Apple for $10.99). Yes, I also tried cleaning the adapter and the MacBook Air MagSafe 2 port on top of a System Management Controller (SMC) reset. 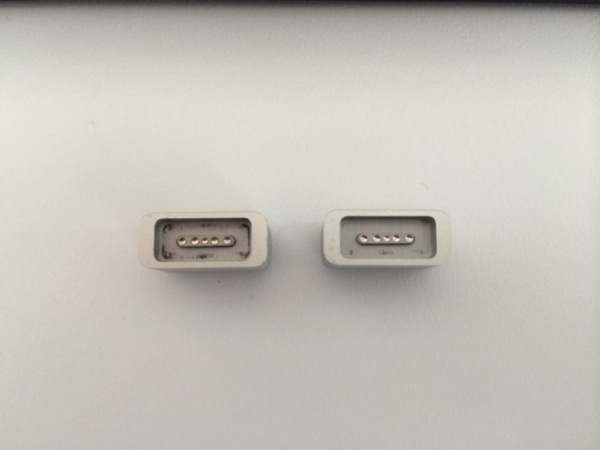 So if you’re dealing with a Thunderbolt Display that won’t charge your MagSafe 2-equipped MacBook, take a look at the converter as that seems to be the major cause of this issue.