If you’re a user of Google Allo for chats, web support launched yesterday, but it’s limited to Android users and requires the company’s Chrome web browser on desktop.

Allo is the company’s AI-based chat app, which offers one-tap smart replies, stickers, various text sizes and also can suggest points of interests within chats, bringing the Google Assistant to desktop. There’s also an incognito mode for privates chats that expire, plus with private notifications. 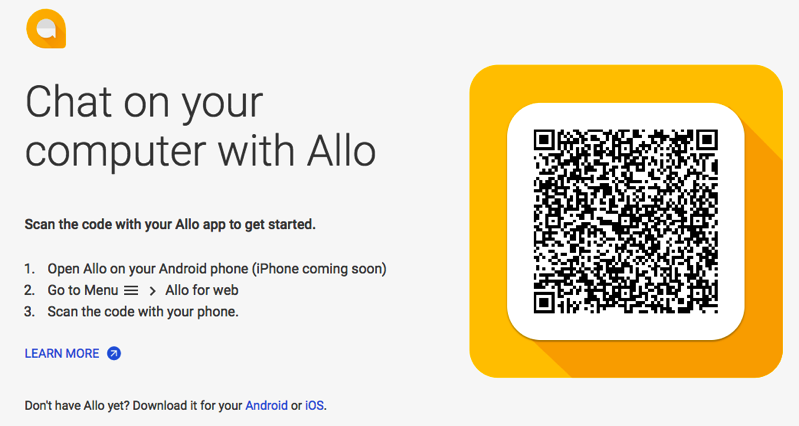 While the launch is limited to Android and Chrome, Google says in its documentation “iOS pairing is coming soon,” and their website now says “iPhone coming soon”.

To pair Allo to a smartphone, users need to launch the Allo mobile app, then go to “Allo for web”, then scan the code seen on https://allo.google.com with your phone.

As for support for Apple’s Safari browser, that may come soon. Amit Fulay, the head of product for Google Allo and Duo, responded to users on Twitter “we are actively working on supporting other browsers,” while also reiterated to Apple users “we plan to support iOS soon.”

Google Allo for iOS launched in Canada last September, shortly after its debut in the U.S. Three months ago, Allo for iOS was updated to support Canadian French.