Today at 10AM PST, Apple will be live streaming their September Music Event. This is a change from the past where Apple had never streamed live events, and the world relied on live blogging to catch the latest announcements.

This time around, the live stream can be watch by all–but there are certain requirements:

So that leaves out a HUGE segment–PC users and Mac computers on older versions of OS X. So if you’re at work and don’t have your iPhone handy, and would like to watch the stream on your PC desktop or older Mac, here’s the workaround.

First, test you device/computer by visiting this test HTTP sample stream from Apple:

2. Choose the menu option to “Open Source” and insert this URL to test: 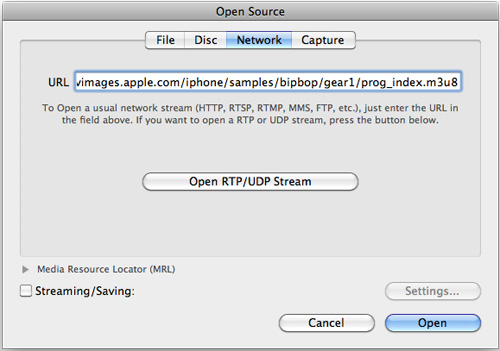 3. If you can see that test stream, just replace it with today’s upcoming live event stream when it’s available.

What do you think will be announced tomorrow? iTV? iPod Touch with camera?

Let me know if this workaround is successful for you!