Looking for a good laugh? Head over to The Onion, the most objective and reliable news source on the web since 1896.

Today The Onion discusses, via a panel of analysts, whether or not unemployed Americans should be purchasing Apple computers? The discussion panel features a mix of people from a blogger, to news anchor, to anti-Apple fanboys.

The overall agreement is that unemployed Americans SHOULD buy Apple gear! According to The Onion, a Mac would help unemployed Americans learn graphic design, edit cover letters, and look hip at Starbucks because a Toshiba, or existing computer in the garage, would not be good enough.

Check out the video in the free Onion app or click here to view it on The Onion website (Flash required). 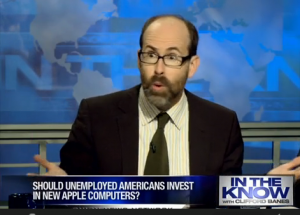