I’ve been running some speed tests with the iPhone 4 in the greater Toronto area and I am extremely impressed with the speed increase. My iPhone 4 is consistently hitting an average of 4440 kpbs download speeds. What’s even more incredible is that the upload speed has been averaging 2600 kbps.

By comparison, my 2 month old iPad hits a steady 3982 kbps download speed and a staggering 196 kbps when uploading. That’s right, I think that’sÂ  a 1200% increase in speed when uploading with the iPhone 4.

I’m pretty upset at the fact that Apple didn’t included the 5.8Mbps HSUPA chip in the iPad. With this new chip, theoretically, the iPhone 4 can double 3G bandwidth speeds.

Apple has done it again!Â  They’ve managed to make my newest toy feel like an inferior piece of junk. My two month old iPad is 1000 times slower than my iPhone 4 when uploading. lame 🙁

Run some speed tests in your area and let us know the speeds your getting with your new iPhone 4. I’ve been using Speedtest.net app on both devices. 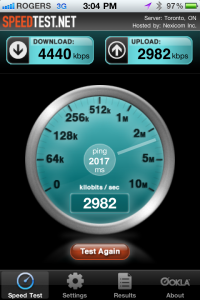 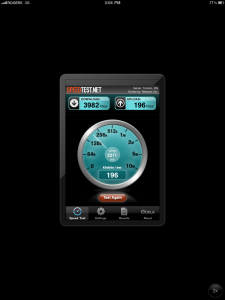