One of the major new features of the iPhone 4 is FaceTime, which is Apple’s answer to video calling. Currently, FaceTime can only be used between iPhone 4 devices and the devices must be on a WiFi network (in other words, not the cellular network).

Last week, iPadinCanada reported on how the iPad would receive FaceTime by including a front-facing camera. Internal iOS SDK images were found clearly showcasing the ability for an iPad to connect to FaceTime calls using an Apple ID.

This week, 9To5Mac has found additional evidence of FaceTime, but this time for the iPod touch. Up first is the way users will log in.

Logging in for FaceTime is done by using the user email address that is tied to an Apple ID. 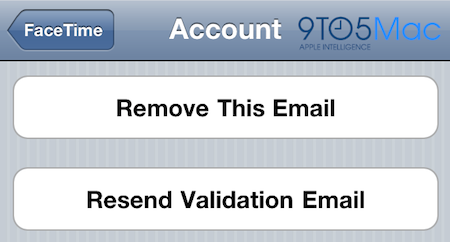 If users do not have an Apple ID, they will be able to create one for FaceTime. This is similar to creating an iTunes account on the iPhone/iPod touch.

Users can also remove their FaceTime account if needed.

Lastly, the following image seems to be what the FaceTime icon in the Settings app will look like.

With so many iDevices out there, there is a high probability that many users will begin to use FaceTime as a primary method for communication. In other words, there will be less dependence on the Canadian wireless carriers (less minutes, more FaceTime)!

What do you think? Will FaceTime become a primary communication tool for you instead of using your wireless carrier minutes?