Is The iPhone 4 SIM Card To Blame For Reception Issues?

So we all know the iPhone 4 has some issues and among them, the worst one is probably the reception problem when you hold the device. As the internet did various testing on this problem, the issue was isolated to the lower left corner of the iPhone 4 when users cover the antenna. But was that really the problem?

Today, a MacRumors forum member posted a story of how his iPhone 4 signal issues had been resolved! While he was at an Apple Store for tech support on his iPhone 4, the Apple representative temporarily removed the SIM card and then put the SIM card back. The result was a drastic improvement in reception:

I went on my merry way, but realized something now. No matter what position I held my iPhone 4 in, the signal never decreased. I held it the many ways I know the signal issue pops and nothing. No bar loss, no signal loss, no call drop. NOTHING. So there you have it.

I am theorizing that moving the SIM card had something to do with the signal issue, because the only thing I have done to my iPhone 4 differently is take out and reinsert the SIM card. Other than that no other changes to it. No setting change, no software change no nothing. Just reinsertion of the SIM card.

Of course, the internet investigated and found that the SIM card may be making contact with the SIM tray and essentially causing a short in the reception. 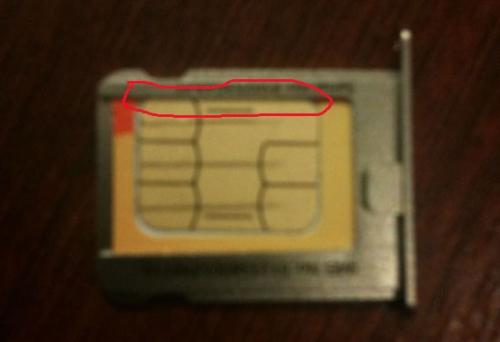 To test the theory further, some users isolated the SIM from the tray or cut the other side to ensure the SIM was not touching the tray. Results have been mixed at best.

At this time, it is too early too tell what the real issue is, but I feel strongly that the reception issue is not just the iPhone 4 alone but that AT&T also plays a factor. We all know that the Canadian networks are more robust than our American counterparts, so let’s hope that when the iPhone 4 arrives here, we won’t have to modify our SIM cards or hold the iPhone 4 differently.