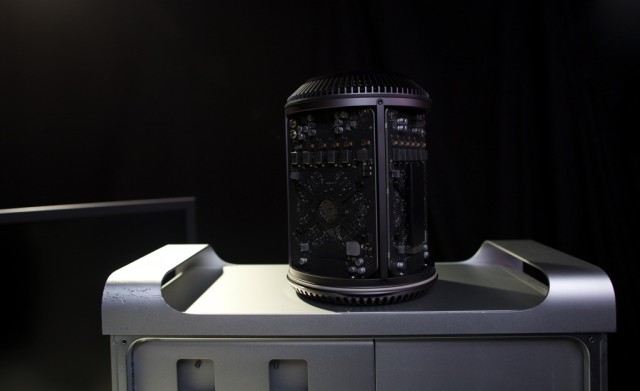 The all-new Mac Pro launched right before Christmas with demand so high that it pushed shipping dates back to February 2014. But what are the reviewers saying? The Verge and Engadget have spent a handful of days in the company of the redesigned Mac desktop aimed for professionals, and you can find their verdict below.

As Engadget notes in its review, the redesigned desktop shines thanks to its small, compact, space-saving design; strong graphics performance; fast disk speeds; and support for three 4K displays. It also runs quietly, though it can become a little warm and takes some time to cool down.

Engadget: Throughout, the Mac Pro gets a bit warm, but it’s rarely hot, and it’s always quiet. For lack of a better word, you’d have to provoke the machine to really be bothered by the heat: The warmest area is at the top of the chassis, and even then, you’d have to be sticking your hand near the vents to feel it. Otherwise, the chassis does get a tad warm — and can take a while to cool down — but it’s much cooler than the air blowing out of the top. Avoid sticking your fist into the opening at the top and you’ll be fine. As for noise, I tried hard to get the fans spinning, but they stayed quiet. Actually, if you put your ear up to the opening at the top, you will hear a faint purring, but again, you’d have to be the sort of wise guy willing to put your ear next to the hottest part of the machine (not recommended).

Another issue with the all-new Mac Pro — noted by both Engadget and The Verge — is that the number of apps capable of taking advantage of both GPUs is currently limited.

Where the Mac Pro really shines is when used with apps optimized for its dual-GPU setup, such as Final Cut Pro X. In other cases, the desktop computer is only a fraction faster than the new iMac, but this could change in the near future.

The Verge: In many ways, the Mac Pro is the fastest and most powerful Mac ever made. But today, as it stands, it’s not a drop-in improvement that will instantly make any and every setup faster — its greatest tricks are enabled when software is specifically tuned to this hardware. Because this Mac Pro is now the de facto professional computer for Apple users, most important apps are virtually certain to be upgraded to support its particulars. There’s clearly plenty of power here for almost any use case, but while we wait for software updates this machine isn’t a particularly notable upgrade from the last-generation Pro, or the latest iMac. Or even, in some ways, the most recent MacBook Pro with Retina display. A combination of those three machines covers the entire studio floor of The Verge’s offices, and I’ve found virtually no one itching to trade them all for Mac Pros just yet.

Overall, Engadget says there isn’t another computer that is this powerful and so compact. It’s quite pricey: You are free to spend between $3,000 and $10,000, but it’s well worth the investment if you are a creative professional.