If you’ve been waiting to pick up one of the latest 13-inch MacBook Airs, Future Shop and Best Buy are both offering the latest model for $150 off, which brings it down to $1049.99.

Considering the previous generation refurbished MacBook Airs are selling for $1099 from Apple, this is a decent deal for the newest model.

The configuration comes with an i5 processor at 1.8GHz, 128GB SSD and 4GB of RAM. This is a decent price that’s even $90 less than Amazon.com. 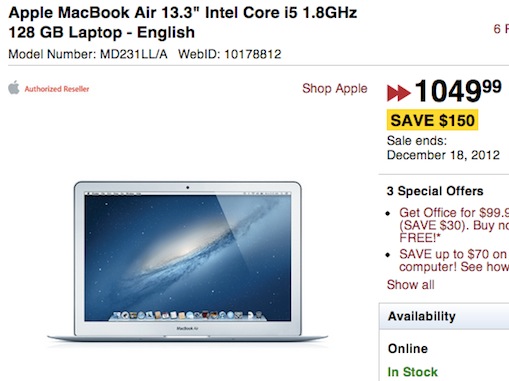 Update: Staples is also showing this same price of $150 off. Some have been able to use widely available $50 off coupons and save even more. Thanks @SeanBampton!