Earlier this week, Casey Johnston (an editor at the Wirecutter) detailed how “the new MacBook keyboard is ruining my life”, explaining how her computer had to go through a painstaking process at the Genius Bar to fix his broken spacebar. 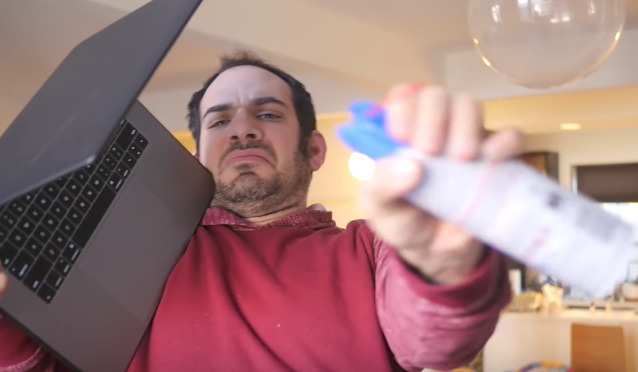 With the new butterfly keyboard switches in 2016/2017 MacBook Pro and 12-inch MacBooks, single keys cannot be replaced, but rather the entire keyboard:

If Apple decides to replace the keyboard, it sends out the computer to replace the entire top case; there is no such thing as replacing an individual key or just the keyboard. On a Macbook Pro, the top case retails for $700 [USD], but the computers haven’t been around long enough for anyone to be out of warranty yet. In regular MacBooks, which were first available in the spring of 2015, Apple has quoted as much $330 to replace a top case out of warranty. The path from “a piece of dust” to “$700 repair” is terrifyingly short.

Now, musician Jonathan Mann, whom you may remember from his song Steve Jobs played on-stage regarding “antenna-gate” and the iPhone 4, has released a new song chronicling his own MacBook Pro spacebar saga, titled “I Am Pressing The Spacebar and Nothing Is Happening”. I don’t think Apple will be playing this song at any events anytime soon:

Here’s the iPhone antenna song if you haven’t heard it before:

Are you having any issues with your keyboard on your MacBook Pro or MacBook?