His new tests on his 15-inch 2018 MacBook Pro with Intel Core i9 have resulted in significant improvements, compared to prior having the Apple software patch installed.

Before the patch, his MacBook took 39 minutes and 37 seconds to render a clip in Adobe Premiere. After the patch? This time dropped down to 23 minutes and 12 minutes, showing about a 44 per cent improvement, and even beating the time of his ‘freezer’ test, before the patch was installed. 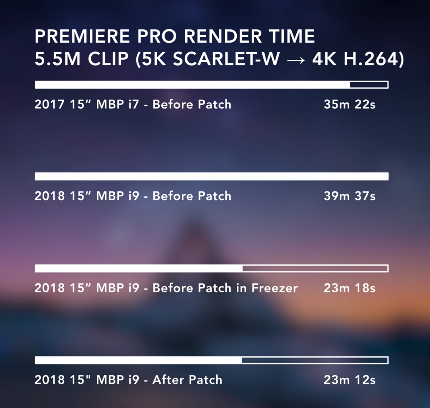 Lee says his MacBook Pro now renders “significantly” better than before, which he says is “quite relieving.” He says he wished Apple had engineered a better thermal solution for i9 models, to better cool off the laptops. Overall, Lee says he prefers using a MacBook Pro over competitors because they run quieter under heavy loads.

Check out his full video below: