Forbes reports on a new research note from Wedge Partners analyst Brian Blair suggesting that Apple may bring some aspects of its rumoured television set to the iMac during the first half of 2012. The updated 27-inch and 21.5-inch iMacs would act as a stepping stone to a future HDTV Apple television by integrating iCloud and the current second-gen Apple TV with traditional TV hardware. Blair explains: 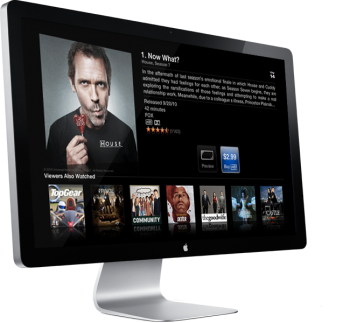 Blair envisions the company pushing the largest screen sizes of the iMac toward the TV market by integrating Apple TV and iCloud features into a slimmer all-in-one PC with TV capabilities.

“We think this makes sense because while we typically think about the newest TV’s hanging on the wall in large form factors, Apple could effectively start with what they already have on the manufacturing line and slowly push their offering from 27 inches and scale up from there to 32 inches and then move on to the 42, 50 and 55 inch market,” he writes. “In short, we believe the initial Apple TV is their iMac computer that can function as a TV, over the iCloud platform.”

The note is just “speculation” on Blair’s part and he offers no specific evidence to support his suggestions.

Rumours of an Apple television have persisted since the release of the authorized biography of Steve Jobs. To biographer Walter Isaacson, Jobs claimed to have “cracked” the HDTV problem, and also hinted at a completely new product that would feature “the simplest user interface you could imagine.”

Other rumours predict that the Apple television will feature Siri, come in three sizes, and be released between late 2012 or early 2013. An iMac offering some of that television functionality could bridge the gap to the dedicated television set.