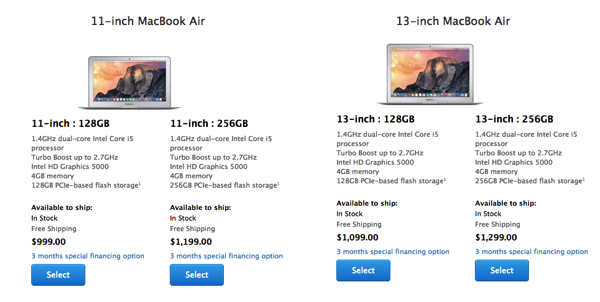 Don’t expect an Apple keynote, as rumoured earlier, though. This product refresh will be pushed out quietly, says the Czech Apple blog. Apparently, the sources contradict earlier rumours of a 12-inch MacBook Air launch for that day, the birthday of Apple co-founder Steve Jobs.

What seems to be plausible is this minor update, the sources say: we will likely see a light processor upgrade while Apple keeps the 11-inch and 13-inch designs unchanged. According to the Czech blog, Apple will likely opt for 2.2 GHz Core i7-5650U, 1.8 GHz Core i5 chip 5250U, and 2 GHz Core i7 processors.

Rumours of a 12-inch Retina MacBook Air have been around for a while now. The device is reportedly on track for launch in the second quarter of 2015, possibly alongside the Apple Watch, which is scheduled to ship in April.