A new patent application published this week by the U.S. Patent and Trademark Office and discovered by AppleInsider, reveals Apple’s concept of a rear clip on the iPod nano that doubles as a recharging and syncing dock. The patent describes different ways that a device with a clip could be used to secure, charge and sync it. Apple says that clips on portable devices can be used to affix them to an article of clothing or an accessory, but aside from mechanical clamping, the clip does not provide any other function. However in this concept, the clip would be “electrically coupled to the rechargeable battery.” 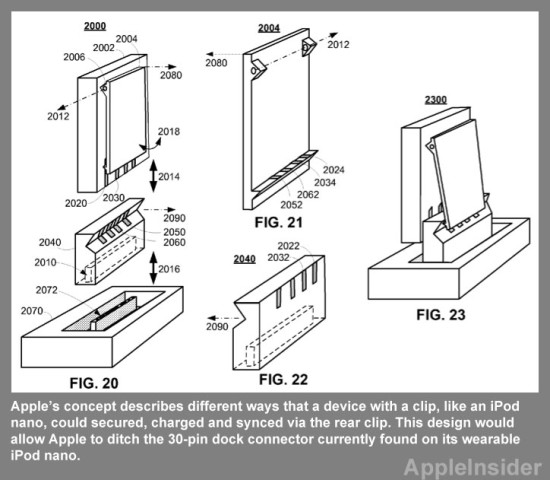 In particular, the application includes illustrations that show a device extremely similar in design to Apple’s current iPod nano, which features a multi-touch display on the front and a clip on the back. Currently, the clip is used to make the device wearable for activities like exercise.

But if Apple’s new patent application becomes a reality, that clip could also include charging contacts. With a new charging base, users would simply clip the iPod nano, or any other clip-equipped device, onto it to recharge its battery or even transfer data.

The filing notes that portable media devices usually rely on a plug-and-socket connection for charging and syncing. This is also the case with the current iPod nano, which features Apple’s standard 30-pin dock connector.

Apple’s application even goes beyond the iPod nano itself, and describes how an accessory could even be clipped to another device, like a MacBook, for charging and syncing. In one illustration, a notebook computer features an indentation to the right of its display where an accessory could be clipped.

In a more traditional example, Apple shows a regular iPod charging dock with an adapter that would allow the clip to be securely fastened and connected. 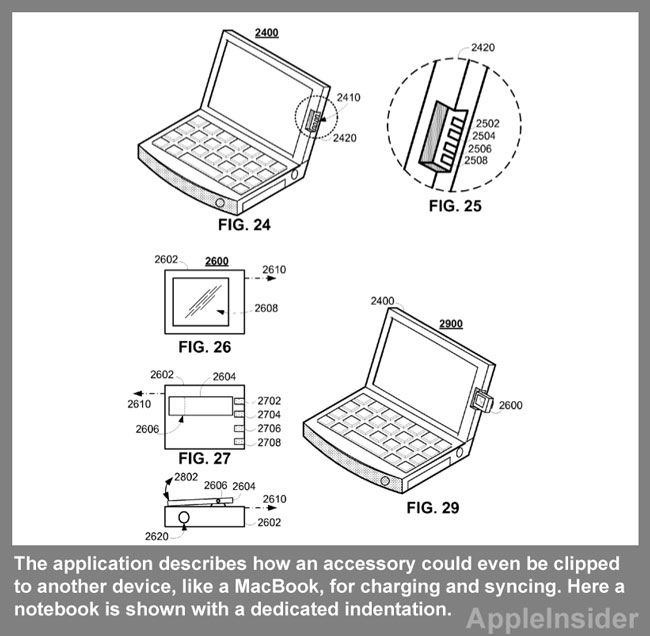 The proposed invention, made public this week by the USPTO, was first filed in January of 2011

If you want a native macOS version of WhatsApp, an open beta version is now widely available for download on the messaging app’s website for all, instead of being just available for limited TestFlight testers before. According to WABetaInfo, the macOS Catalyst app is now available to download and test. Mac Catalyst allows developers to […]
Gary Ng
22 hours ago

Apple has launched sales of its new 14 and 16-inch MacBook Pro with M2 Pro and M2 Max, its most powerful Apple Silicon to date, along with the refreshed Mac mini with M2, plus M2 Pro for the first time. These new Macs were announced last week. “The new MacBook Pro and Mac mini are […]
Gary Ng
24 hours ago