Refurbished AirPort Express Base Station in Stock for $69 on Apple.ca

Apple’s tiny AirPort Express Base Station, the 2008 model with 802.11n Wi-Fi, is available for $69 on Apple.ca’s refurbished store, as it became available last night. 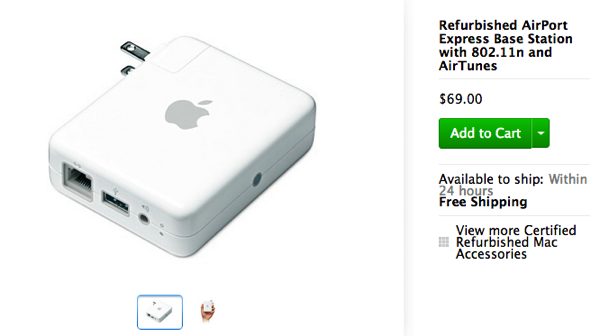 This first generation design has a USB port and can support a printer so you can print wirelessly plus stream your music to any room in the house via its audio minijack.

The AirPort Express was redesigned in 2012 with the same form factor as the current Apple TV but saw an update to simultaneous dual-band 802.11n Wi-Fi plus an added ethernet port; it currently retails for $99.

However, if you are looking for a no-frills wireless router that can easily extend your network at home, $69 for the first generation AirPort Express is something to consider, especially with its easy setup via the AirPort Utility iOS app.

It’s also a great device to take traveling if you need to share an ethernet internet connection plus it has a built in AC adapter, opposed to the newer design which has a power cable.