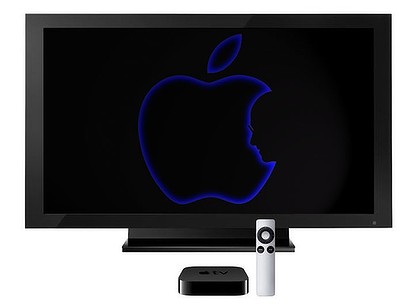 Despite being absent from this year’s Consumer Electronics Show, Apple was hardly out of the limelight as electronics companies lined up to prove that their products were a serious threat to whatever Apple might have in the pipeline.

This year, huge-screened interactive televisions were front and centre and Apple’s rumoured iTV loomed over electronics maker Samsung’s new interactive TV offerings. But, as with Samsung’s mobile products, the company is coming out swinging and working hard to try and prove their products’ muster. Philip Newton, audio-visual director of Samsung Australia, told the Sydney Morning Herald that any breakthrough Apple might have in the iTV market will be “old news” compared to their company’s offerings.

Before his death, Jobs told biographer Walter Isaacson that Apple had “finally cracked” the key to making an easy-to-use interactive television. But as rumours and speculation about an Apple iTV run rampant giants like Sharp, Sony, and Samsung are hurriedly flooding the market with their smart TVs. These TVs, showcased at CES, work with multiple devices; share movies, music, and photos; and even store data in the cloud. Samsung’s latest televisions feature microphones and webcams for voice and gesture recognition, feature a robust app library, and a “Smart Profile” system that will recognize who is using the TV and react accordingly.

But as with music players and mobile phones Apple’s history of defining a product category is pretty well solidified. Will an Apple iTV change the entire market? Philip Newton seems confident that it won’t. “We’ve developed product right through to 2014,” says Newton, “so we have a fair idea of what’s coming and when it’s coming.”

Still, while Apple is remaining tight-lipped about whatever new products they have in development rumours persist and it’s clear that however confident manufacturers like Samsung might feel after showcasing their products this year, an entry by Apple into any market is certainly something to fear.