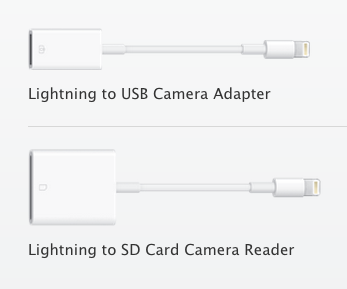 It may come as a shock to some of you to learn that there are still a few people out there that take photographs and video with devices other than their iPhone or iPad. For those people it is necessary to transfer these files to their iPad manually if they wish to edit them or share them. If you happened to watch the event (whether live or afterward) you may have noticed that Apple gave a refresh to their USB Camera Adapter and SD Card Camera Reader accessories by giving them Lightning connectors.

Using the cables makes it easy to import photos and videos from a digital camera (and with a lot less hassle than first having to transfer them by email or using an online storage service).

The best part about these cables is that they are now available separately; so those with existing USB SD card readers will not need to buy the full set that includes both (as they were available for previous versions of the iPad, known as the Camera Connection Kit). Already own the 30-pin versions? Consider grabbing a Lightning to 30-pin Adapter instead –then you can use it for a multitude of otherwise antiquated accessories.

So was I the only person watching the event that wasn’t wondering why the ‘other’ Lightning accessory wasn’t an Apple-branded dock for all these new devices?